Captain Erik J. Anthes graduated from the University of Central Missouri in 2007, earning his Regular Commission as a Second Lieutenant in the United States Army, a Baccalaureate degree in Political Science and a minor in Military Science. He first served with the 1st Heavy Brigade Combat Team, 3rd Infantry Division, deploying first to Iraq as a replacement Platoon Leader in Ramadi during the Surge Campaign then again as a Company Executive Officer and Brigade Transportation Officer in Baghdad during the closing of Operation Iraqi Freedom and the beginning of Operation New Dawn.

Following his distinguished service during his first combat deployments, Captain Anthes was selected to serve as the Commander of the Historic 16th Infantry's Forward Support Company, "Easy Red." His vision enabled "Easy Red" to rebuild sustainment competence in combined arms maneuver and wide area security operations. The unit excelled, earning the Commanding General Saber Award from General Paul E. Funk for reducing unit misconduct to zero incidents.  Captain Anthes was selected as the US Army Officer of the Year for the Transportation Corps in 2014.

During his command, Erik was a first responder to the Moore, Oklahoma after an EF-5 tornado disaster that destroyed the city. He worked with fellow veterans and first responders; establishing expeditionary receiving, storage, and distribution facilities in the aftermath of the disaster. For his efforts, Erik was awarded the Military Outstanding Volunteer Service Medal. This experience served as a bellweather for his emergent experience when he was again called upon to serve in combat in Iraq.

Captain Anthes was the United States' primary logistics advisor to 15 NATO & Coalition nation military partners. The Republic of France decorated Captain Anthes for service rendered in combat to their Army, Marines, and their elite GIGN protective service as he accompanied them on missions throughout France’s Operation Chammal.

In recognition of his distinguished service to the nation, Captain Anthes was selected as the University of Missouri's Governor Mel Carnahan Fellow, earning his Master of Public Affairs Degree in 2017. During his attendance at Missouri's flagship university Erik was awarded the Chancellor’s Award for University Leadership, and received the Missouri Veteran Service Award from Missouri's Lieutenant Governor for his progressive legislative accomplishments on behalf of American combat veterans.

Captain Anthes is a Distinguished Member of the Regiment (DMOR) of the Historic 16th Infantry Regiment. He is also the first Logistics Officer to receive this honor from the US Army Chief of Infantry and the Secretary of the Army.

The US Army's Chief of Transportation conferred the honor of the Order of Saint Christopher unto him.

Captain Anthes was Honorably Discharged for his superior service to the Nation in 2018 and continues to serve as Missouri’s most effective advocate for Veterans. 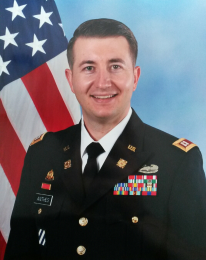