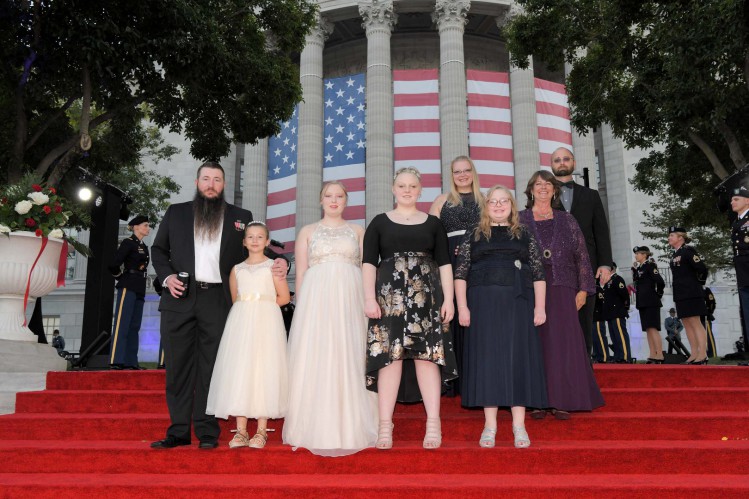 Erik and his daughter Reagan join State Rep. Cheri Toalson Reisch and her family walking the red carpet at the 2021 Missouri Governor's Ball. Erik shook the hand of every Service Member detailed to the service and shared his sincere thanks. 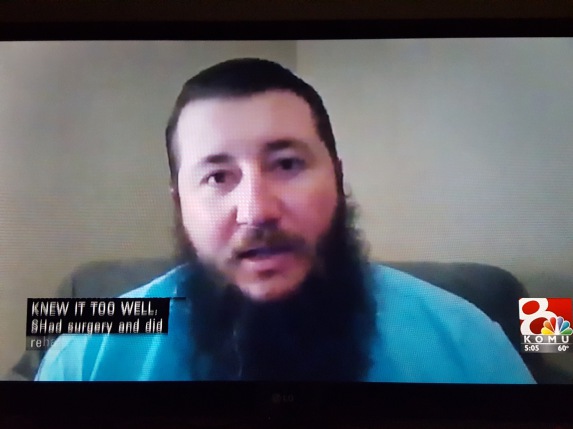 Erik shares the impact the Mizzou Veterans Law Clinic has had for his family, himself, and the Mizzou Law students that have worked on his case after returning home and coping with his injuries from his three combat deployments to Iraq. 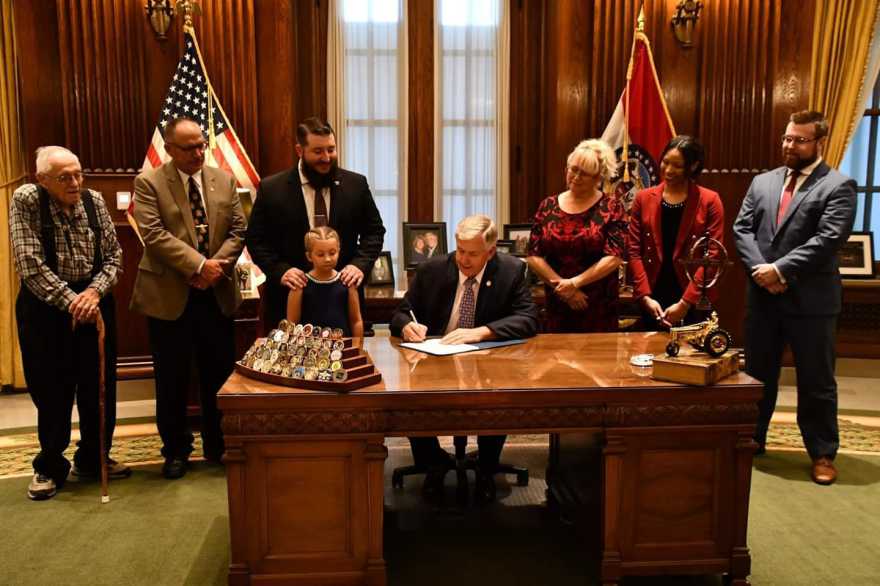 Missouri took the lead in providing collegiate education opportunities for all American combat veterans that will help solve our University System's enrollment downtrend. By focusing on placing veterans with diverse backgrounds and global experiences, members assigned to Missouri in the military, and expanding opportunities for their families, Governor Mike Parson's signature brought the State of Missouri to the forefront of excellence in reintegration of our veterans.  Erik was honored to stand with his daughter as she co-signed the Bill with Governor Parson enshrining Senate Bill 306 into law. The Bill signing was also attended by WWII veteran Navy Capt(R) C. Ben Basye; his son, Marine Corps Veteran Rep. Chuck Basye; as well as Global War on Terror Veteran Army Sgt(R) Philip Bacon, and his wife Marisa. 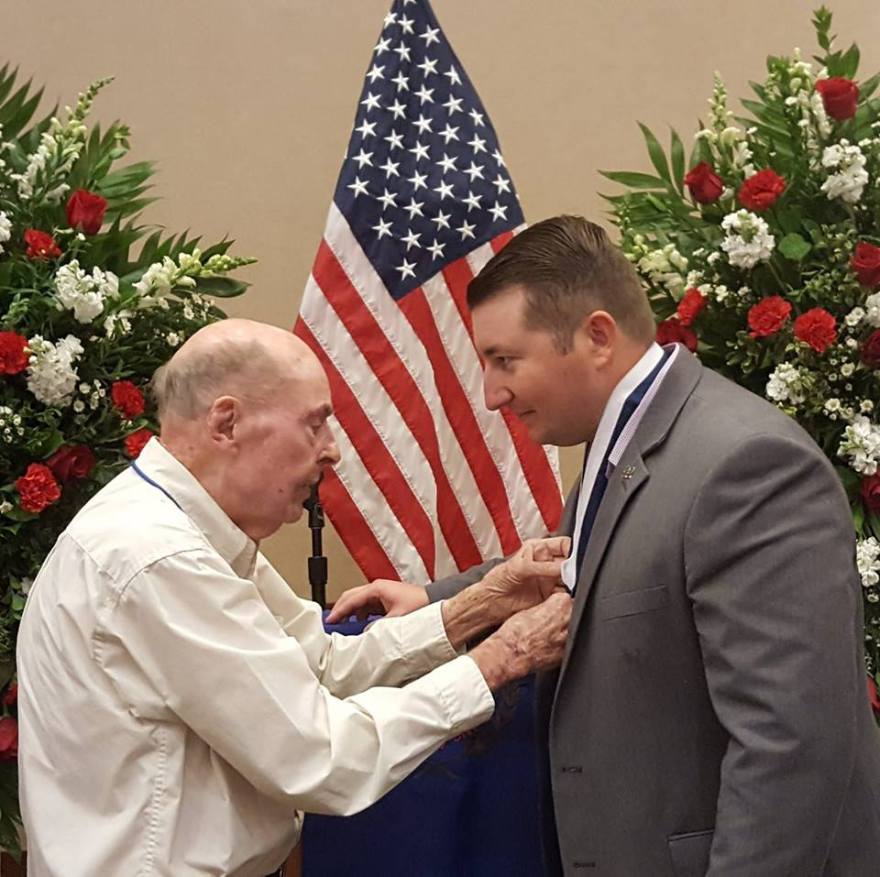 Ray nominated Erik as Distinguished Member of the 16th Infantry Regiment while he was on his third combat deployment to Iraq. In 2018, Ray personally endorsed Erik's investiture into this select fraternity of the United States' most decorated Regiment. 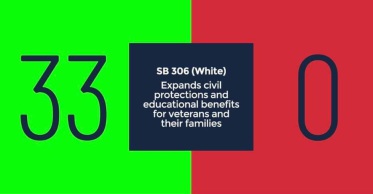 The Missouri Senate unanimously approved the Expansion of the Missouri Returning Heroes Education Act 33-0 on Thursday, May 16, 2019, sending it to the Governor for his signature.

The Missouri Senate overwhelmingly approved the companion Bill that authorizes the Expansion of the Missouri Returning Heroes Education Act. In addition, the unanimously approved Bill enables family members of active duty service members to qualify for in-state tuition, waiving the normal residency requirements. Many of these families have experienced multiple combat deployments and deterrance rotations. These families are now welcomed into our state colleges and universities, bringing their diverse and unique experiences into our classrooms.

Just as Erik predicted, America's veterans will fill the gap. Although freshman enrollment is up with Pell Grant matching programs, there remains a significant decline in the other classes. Our nation's Combat Veterans are prepared and ready to fill these currently empty seats that earn our colleges and universities nothing.

The Expansion of the Missouri Returning Heroes Education Act increases the eligibility for American combat veterans from 10 years after their Honorable Discharge to 20 years, and includes a significant tuition decrease for Masters and Doctorate level degrees. The Bill directly addresses declining enrollment at the University of Missouri and will positively support the University of Missouri System, all public colleges and universities, and the economies of these institutions.

Since returning home to Missouri after his third combat deployment to Iraq, Erik has been been fully engaged in legislative advocacy to encourage veterans to "Come Home to Missouri." Erik believes our state can bring the global experiences of veterans into our community more fully by improving their quality of life. 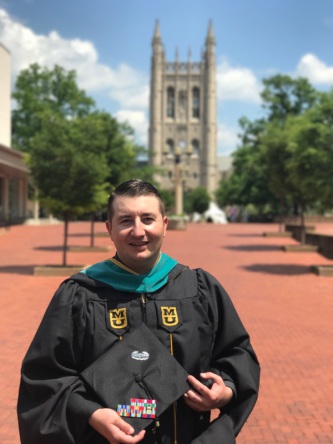 Erik poses with his combat & service medals with Mizzou's Memorial Student Union behind him before he graduated with his Master of Public Affairs degree in May 2017.

The Missouri House of Representatives overwhelmingly passed the measure.  Working closely with House Veterans Committee Chairman Rep. Chuck  Basye (R-47), the Bill's sponsor, and his partner in the Missouri Veteran Quality of Life Initiative, Mr. Phillip Bacon, Erik provided testimony in support of the legislation in the House and intends to do so in the Missouri Senate, where the Bill is currently scheduled to be heard in the Veterans and Military Affairs Committee on April 16, 2019 at 1pm in Senate Conference Room 1 in the Capitol.

If passed, the Missouri Returning Heroes Education Act Expansion will place Missouri as a nationwide leader and example for other states regarding veteran higher education, and make the state extremely competitive when veterans choose where to live when their service is complete.

"When we offer incentives to our nation's veterans we aren't just improving their lives. We are bringing experienced, responsible citizens and leaders into our classrooms and communities. We are bringing their families and the economic potential they bring to Missouri. This is an absolute win for our state, and I will work hard to make sure our Senators and Governor see this aspect of this very important legislation," Erik stated.

Since returning to Missouri from his third combat deployment to Iraq in 2015 Erik has been been engaged in a diverse array of legislative advocacy that has incentivized veterans to "Come Home to Missouri" by improving their quality of life through initiatives like the Returning Heroes Education Act. 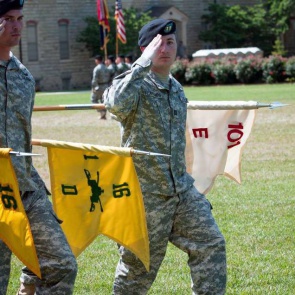 Missouri law enforcement has more than 2,000 funded Law Enforcement positions that are not manned. Rep. Cheri Reisch has again proposed that Missouri taps into its highly qualified veterans to fulfill the needs of our rural communities.

House Bill 558 (2019) establishes a rigorous training program for qualified Missouri Military Police personnel that will enable them to meet the remaining training requirement hours to take the state's civilian Peace Officer Standards and Training (POST) test, honoring the training these Missourians have obtained volunteering to serve their country at the premier military police academy that will to return home to their units and families.

The areas where the Army's Military Police School falls short is simply approximately 40 hours worth of comprehensive training specific to Missouri state statutes and code. The Bill calls for the state to further invest a small amount of money into these demonstrated competant and capable volunteers, and even use the program as a recruitment and incentive for Missouri Army National Guard and Reserve troops.

Erik led this initiative after learning of a pilot program at Fort Leonard Wood initated in 2015.  The pilot program achieved an incredible 91% pass rate for the qualified candidates that took the Missouri POST test. This Bill is the culmination of research conducted by a team of veterans and civil servants that assessed the cost in manpower and equipment that would be needed for future Missourian candidates to meet the POST requirements to take the civilian credential test.  The numbers show the program is feasible.

"A Missourian that volunteers to protect our nation is exactly someone I want holding the line for my community when called upon," said Erik. 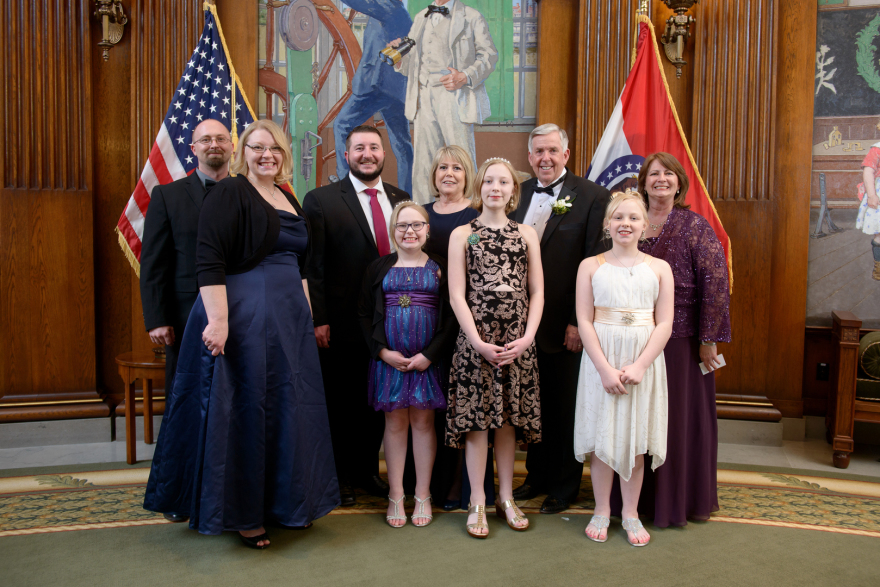 Erik joined Rep. Cheri Reisch and her son's family as they were greeted by the Governor and First Lady of Missouri, Mike & Theresa Parson at the 2019 Missouri Legislative Ball in Jefferson City.

On Wednesday, January 9, 2019, Missouri's 100th Legislature convened, swearing in new lawmakers for the session. Erik joined family and friends to celebrate the re-election of Represenative Cheri Toalson Reisch in Missouri's 44th House District. From a family with strong traditions of military and public service, Rep. Reisch continues to be a strong supporter of Missouri service members and veterans in the Missouri House of Representatives, sponsoring common sense Bills to improve access to education and employment for Missouri's veterans using the skills learned during their service in the military. 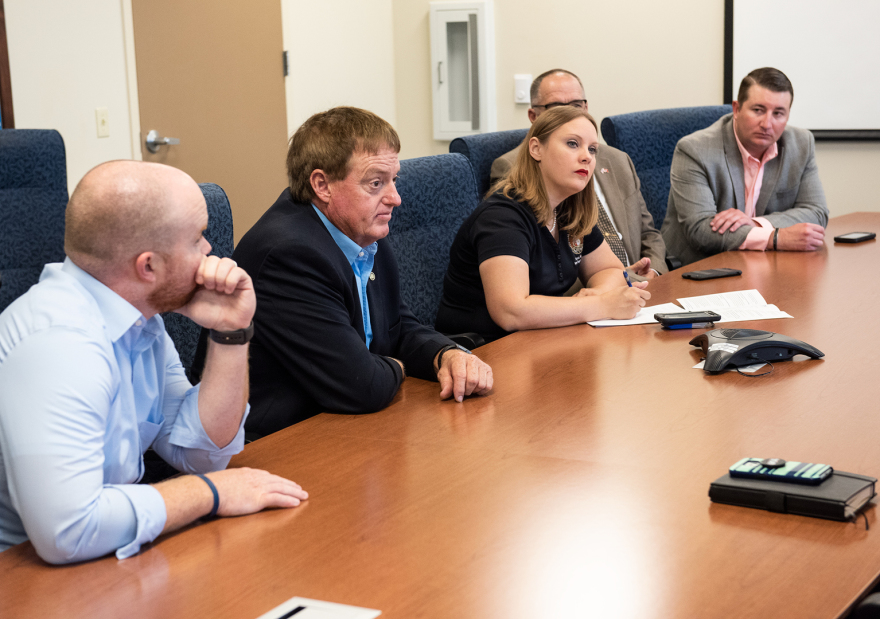 Rep. Basye has been a key sponsor of bills improving educational opportunities for returning combat veterans. Basye filed the Returning Heroes Education Act expansion, House Bill 1368, and will pre-file the same language in a bill for the 2019 session.

Rep. Toalson Reisch sponsored House Bill 1638 in the 2018 session. The Bill aimed to maximize the state's benefit of the Army's Military Police academy to fill more than 2,000 statewide law enforcement vacancies. HB 1638 would create a path for Missourians that have completed the MP academy to earn credit for the practical requirements from the state's Peace Officer Standards and Training (POST) and sit for the written exam. She intends to re-file the language in a Bill for the 2019 session. 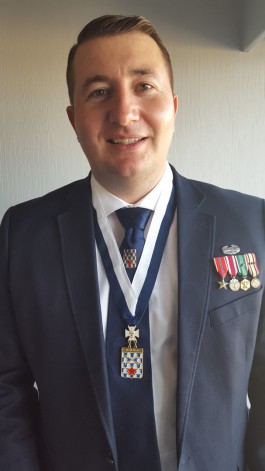 A highly decorated World War II veteran that bravely made all three of the 1st Infantry Division's amphibious landings in North Africa, Sicily, and Normandy, earning multiple Silver Stars, affirmed his personal approval of Erik's selection as a Distinguished Member of the Regiment for the 16th Infantry Regiment during the 1st Infantry Division Reunion in Chicago, IL in August 2018. Staff Sgt. Ray Lambert, 97, nominated Erik for this honor in 2015 during Erik's third combat deployment in Iraq. Due to an unexpected illness, Ray was unable to travel to personally confer the honor. Erik, a Combat Action Badge & Bronze Star Medal recipient from his extensive combat service in Iraq, was invested by Honorary Colonel of the Regiment, Col.(R) Ralph Kauzlarich in 2017 in Erik's home state of Missouri. In Staff Sgt. Lambert's place, Erik invited his father, Erik Sr., a career law enforcement officer of 28 years and recipient of his agencies Lifesaving Award, to participate in the official investiture ceremony in Kansas City, Missouri. 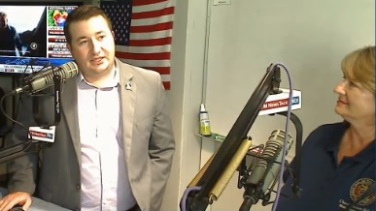 Today, August 28, 2018, SB 573 takes effect in Missouri. This law establishes the Missouri Veteran Bill of Rights; allows private businesses to give hiring and promotion preferences to veterans, spouses of disabled veterans, and spouses of deceased veterans; allows veterans access to small business loans with mentors; puts Veterans at the front of the line for Missouri's Linked Deposit Program, extends eligibility to the Show-Me Heroes program to five years, and creates equity in our tax code among our service members on Active Duty & Reserve, and National Guard by phasing an elimination of military earned income tax for normal Drills and Annual Training events.

Link to the Statute Here: 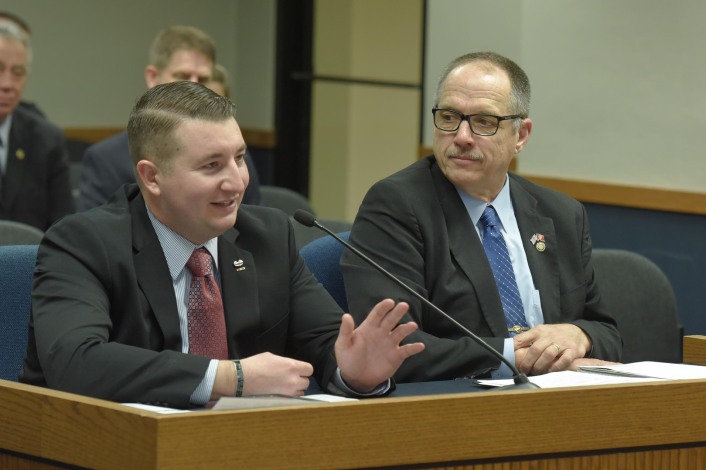 Erik is Missouri's leading voice for Veterans.  His passion for common sense legislative advocacy has incentivized Veterans to "Come Home to Missouri" through improved quality of life initiatives.  Erik remains a primary proponent of legislation providing education opportunities and incentives to combat veterans and family members of those who made the ultimate sacrifice for our state and nation.  Recently, Erik has championed legislation that enables Veteran employment preference and the Missouri's "Veteran Bill of Rights".  Additionally, Erik has enabled equity in the law for Missouri's Active Duty, Reserve, and National Guard personnel regarding taxation. Through his dedicated advocacy, Missouri now recognizes each Service's Valor Crosses and Combat Medals in Missouri state statutes.

Erik was selected as the 2017 Governor Mel Carnahan Fellow at the University of Missouri. 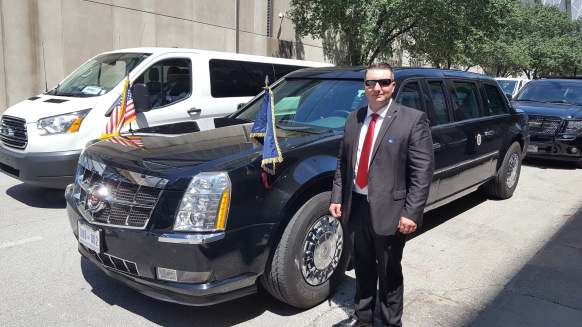 Erik, a Life Member of VFW Post 6276 in Centralia, Missouri, stands next to the Presidential Limosuine during President Trump's Missouri visit to address the Veterans of Foreign Wars National Convention in Kansas City, July 24, 2018 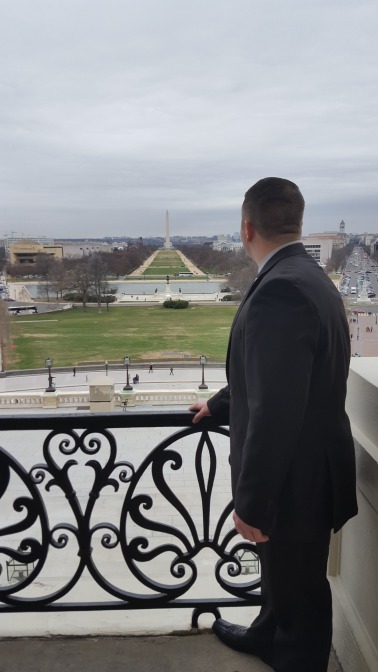 Erik traveled to the White House and US Capitol in Washington, D.C.  See more pictures here...